Inaugurated as the minster of science and ICT

“Super-gap in the AI-semiconductors field” 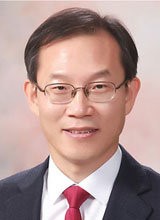 Jong-Ho Lee was inaugurated as the Minister of Science and ICT o the 11th. He presented rising to the “top 5 powerhouse nation in science and technology” and being a nation that has “hegemony over the digital economy” as key tasks.

During the inauguration ceremony, which was held at the Sejong Government Complex over live video platforms, Minister Lee said, “We are now standing in the middle of a technological revolution”, and that “Together with the people, I would like to create a future of a Korea that is the top 5 nation in science and technology, and has the hegemony over the digital economy”.

Minister Lee added, “Let us all unite and put in efforts with the mindset that our one step made in the present will determine the future of Korea for the next 100 years.”, and emphasized that “We need to expand participation from the private sector in policy making in the scientific and digital field, and we should redesign the mission-oriented, problem-solving-oriented national R&D system.” The explanation is that the transformation from the current government-led R&D to a non-following, pioneering R&D led by the private sector and supported by the government is important.

On this day, Minister Lee picked semiconductors, AI, space, and biological technology as the areas in which securing core technologies that would enable Korea to maintain a technological super-gap with other countries. After the inauguration ceremony, Lee met with the reporters. Regarding the criticism that the scientific and the ICT sectors are being neglected, Lee said that President Yoon is aware of the importance of science and technology and that such criticism will be conveyed to the President.