Professor Sang Kyun Cha says, “ The strength of Ukraine, the ‘David’, which is battling Russia, the ‘Goliath’, is the cultivation of digital leaders. (Joongang Sunday, 2022.04.02) 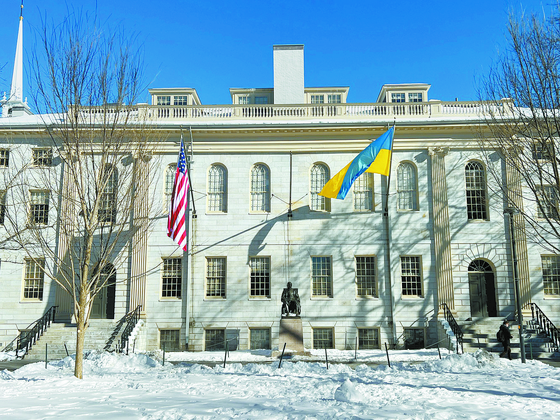 5 weeks have passed since Russia invaded Ukraine. A nation’s sovereignty was brutally damaged by Russian President Vladimir Putin, whom US President Joe Biden referred to as a dictator and a war criminal. According to Reuters, the war has caused 10 million refugees and 23,000 deaths so far.

This battle between Goliath and David seemed like Putin’s stage when it first began. However, Goliath, having lived in a ridged and closed world, was unable to foresee the rise of a new paradigm. SNS, digital policy, and storytelling abilities of Ukrainian President Zelensky, who was an actor in the past, were David’s stones against Goliath’s tanks and missiles. A paradigm shift that goes beyond the rules of past wars has occurred. The entire world, which opposes the war, is cheering for Zelensky, the main character in this paradigm. The prime ministers of Poland, the Czech Republic, and Slovenia, all of which share borders with Russia, took the risks to visit Kyiv, the capital of Ukraine, by train to show solidarity with Zelensky.

Zelensky, who did not have a large presence within Europe before the war, became the Churchill of the 21st century through the war with Russia. On March 25, a team of British journalists from The Economist that had entered Kyiv asked Zelensky the reason for the drastic change. He said that honesty in revealing himself without hiding anything was the top priority in leadership, and that such leadership made it possible for the change to occur.

Zelensky online video speeches to US and British parliaments 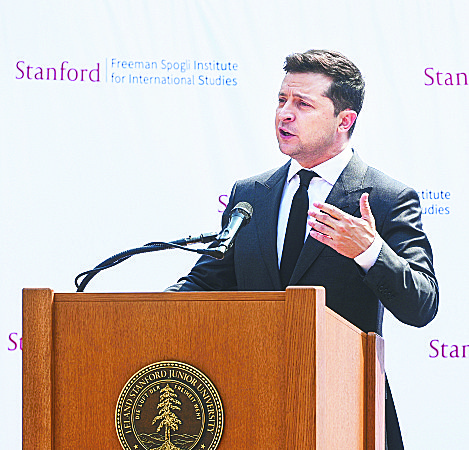 Zelensky giving a speech at Stanford in the September of 2021. [Photo Stanford]

Zelensky, when offered a path to safety by the US and Turkish governments when the Russian attack was imminent, declined the offer and instead urged them to aid Ukraine with weapons. Afterward, he announced over SNS that he would remain in Kyiv and fight until the end alongside Ukrainian citizens. He was retaliating against the aggressor by communicating with the world to gather the power of public opinion.

On March 8, for the first time in the world, the president of the invaded country delivered a touching video speech, which was recorded in Kyiv, where the war is still ongoing, and was broadcasted to the British Parliament over the internet. Following this, Zelensky gave the online video speech to parliaments of other major countries that were opposed to the war, such as Poland, the United States, Germany, Israel, and Japan. He had felt limited in dealing only with the heads of state, and chose to approach the parliament and the people of each supporting country directly. His address to the British Parliament began with a recount of the sufferings he had endured over the first 13 days of the war. He then quoted the dialogue “To be or not to be” from Shakespeare’s tragedy “Hamlet” and promised that his answer was “to be”, and that he would not give up and not be defeated.

“We will fight to the end in the woods, in the fields, on the beaches, and in the streets.”

His pledge was based on the famous speech given by Winston Churchill in June 1940, which appealed for British support by recounting the history of how Britain was placed in a difficult position by German attack in the early days of World War 2. Zelensky’s pledge moved the then prime minister Boris Johnson, and the British members of parliament gave a standing ovation.

In the speech given to the joint US House of Representatives address on the 16th of March, Zelensky mentioned the 1941 attack on Pearl Harbor and the 9/11 attack of 2001.

He said, “We are not fighting just for Ukraine. We are also fighting in the name of the future for the values upheld by Europe and the world. The United States coming to Ukraine’s aid is coming to Europe’s and the world’s aid, and it is how historical records will show that justice was protected.”

Zelensky’s new diplomacy, which appeals to the allies’ congress by illustrating the tragedies of war through online video speeches, is not unrelated to his visit to Silicon Valley after meeting President Biden in Washington FC in September of last year. Anything is possible in Ukraine. This is the central message of the speech that Zelensky gave at Stanford on the 2nd of September last year. He said that he was building a democratic and transparent system to eliminate corruption and to counter the threat of a Russian invasion, and that he was following the “stay hungry, stay foolish” mindset advocated in the speech given by Steve Jobs at a previous Stanford graduation speech to push for change.

To establish government transparency, Ukraine is pushing for digital IDs, digital passports, digital licenses, mobile voting, and digitalization in other public services, and is supporting the development of related industries. Zelensky met Tim Cook, the CEO of Apple and a venture capital to ask for cooperation. Due to the war, this plan is at a standstill, but the belief that anything is possible is the basis of the power that keeps Ukraine from Russia. 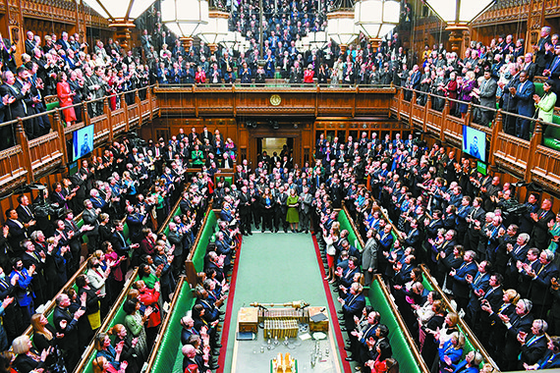 Zelensky’s visit to Silicon Valley was made possible by the relationship forged between Stanford and Ukraine. Since 2005, more than 20 Ukrainian leaders have graduated from Draper Hills program at Stanford’s Center on Democracy, Development, and the Rule of Law. Since 2016, the UELP (Ukrainian Emerging Leaders Program) was formulated to allow Ukrainian next-generation leaders to study at Stanford for 10 months. In 2021, three next-generation leaders were invited. When the war broke out, Mark Tessier-Lavigne, the President of Stanford University, immediately met Ukrainian students and scholars to comfort them.

Stanford was not the only university that had made a preemptive investment in Ukraine. On the 28th of February, four days after the invasion, Lawrence Bacow, the president of Harvard University, made the following public statement:

“Putin’s reprehensible invasion of Ukraine has endangered countless lives and undermined the country’s sovereignty. Our university, which strives to defend democratic ideals and human rights, has the responsibility to condemn this ruthless invasion. Starting today, Harvard will raise the Ukrainian flag and stand alongside the Ukrainian people.”

Maintaining such a position was natural as the president of a leading university, and is based on Harvard’s deep understanding of Ukraine. The university established the Center for Russian Studies in 1948 to study Russia and Eurasia, and in 1973, established an independent institute for Ukrainian studies.

What kind of people are the presidents of Harvard and Stanford University, the enlightened intellects of the international community, who express their opinions at the right time and guide the world? There exists a common denominator between those two individuals. Similar to Steve Jobs, the two were from less fortunate backgrounds but are always looking for new things and challenging themselves. Bacow, who took office as the President of Harvard University in 2018, was born to Jewish parents that had fled from Europe during World War 2 and had immigrated to the United States. His father is from Belarus and his mother is the only member of her family to have survived Auschwitz. After receiving his bachelor’s degree in economics from MIT, his doctorate in jurisprudence (J.D.), and in public policy from Harvard Law School, he has been researching urban planning at MIT for the last 24 years. He was appointed to the position of the President of Tufts University in 2011, and after moving to Harvard in 2011, was appointed as the President of Harvard University in 2018 at the age of 67.

To facilitate a quantum leap forward, when Stanford University entered the 21st century, professors from less fortunate backgrounds were appointed as the President. President Mark Tessier-Lavigne was the first in his immediate family to earn a college degree. After his early graduation from McGill University in Canada, he enrolled at Oxford University, where he received another bachelor’s degree in philosophy and physiology. He then received his doctorate in physiology from UCL and went on to become a professor at UCSF in 1991. He moved to Stanford in 2001. He was appointed as the chief science manager at Genentech in 2003, where he led a team of 1,400 scientists to research new drugs and diseases, including cancer, immune system disruption, infectious diseases, and neurodegenerative diseases. He was appointed as the president of Rockefeller University in 2011 and then the president of Stanford University in September 2016.

President John Hennessy, who led Stanford University for 16 years since 2000, is a computer scientist that was awarded the Turing Award for his contributions to the industry and for founding a company for his computer architecture research. On leadership, he commented as follows:

“After going through several crises in the 5 years between founding the company and successfully going public with an IPO, I have developed an ability to deal with such difficulties. And after realizing that a handful of people with the determination to do something can change the world, I embarked on a journey to transform our university into a university that exerts a larger, more positive effect on the world.

Whether it is a country or a university, without constant change, it cannot last forever. Thomas Kuhn said that paradigm shifts occur through discontinuous shifts, and that brave outliers on the periphery, not mainstream forces, lead these shifts. President Zelensky, who was an actor, and presidents of American universities were not mainstream since the start of their careers. These are the leaders that are not afraid of discontinuous transitions. I wish Zelensky success in defending Ukraine’s sovereignty. 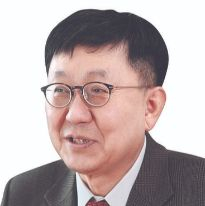 Sang Kyun Cha, the director of the Graduate School of Data Science.

Founded a startup for experimentation in Silicon Valley in 2002.

The startup that he had founded was acquired by SAP, a German company. He established a Korean research facility in SAP and led the research and co-directed company-wide development until SAP HANA became independent.