Professor Seung-Woo Seo, “Developing autonomous driving vehicle for military use that will run on off-roads” (The Korea Economic Daily, 2022.01.20)

Professor Seung-Woo Seo, a Korean researcher, and a pioneer in the field of autonomous driving 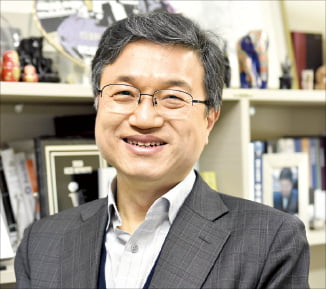 “I always use public transportation to commute. Many express curiosity at the fact that a researcher of autonomous driving not having his own car. When I complete the technology that can safely pick up and transport people, I will commute to and from work with a self-driving car”.

Seung-Woo Seo (above photo), a professor at the SNU Department of Electrical and Computer Engineering, is called the “godfather” of Korean autonomous vehicle research. He is a scholar that researched this field for the longest time in Korea, and is the person behind the “SNUver”, the first self-driving vehicle in Korea to run on public roads.

Ironically, the hobby of the researcher of technology of freeing people from driving is ‘walking’. He takes public transportation every day, alights at the Nakseongdae Station, then walks 40 minutes to the laboratory. His philosophy is that independent of the technology that makes lives more comfortable, exercise should not be neglected.

Professor Seo, who is called the pioneer in the field of autonomous driving research, is attempting a new research. He is currently working on developing a self-driving car that can run on ‘off-roads’ for military use. He said, “It’s a completely different field from existing autonomous driving; it is challenging but at the same time exciting”. On the 1st of this month, I met Professor Seo, who was inaugurated as the chairman of IEIE, at SNU.

Professor Seo said with a smile, “Military manpower resources are continuously decreasing, so military vehicles will need to be unmanned someday.”, and “since autonomous driving tests are being held on rough fields and not on roads, it is more tiresome”.

Professor Seo is also an entrepreneur who jumped into the self-driving service market. He founded the startup ThorDrive with his students in 2015, and launched an autonomous delivery service in Silicon Valley 3 years later. It was a decision made by the lack of Korean investors due to the high regulatory barriers in Korea.

Has the situation improved over the last 4 years? Professor Seo said, “many relevant regulations have disappeared, but there are many temporary measures so the problems that will arise when autonomous driving starts to be widely used remain to be unknown”. He also mentioned, “But still, it is very fortunate that there are some achievements. The self-driving technology that ThorDrive developed is being used in the Sejong Smart City and in Navy bases”.

What are the measures that Korean Companies should take to take the lead in the self-driving vehicles market, which had become the battleground for big tech companies? Professor Seo responded, “There is a need for academic-industrial cooperation in the field of AI and metaverse”. As the chairman of IEIE, his goal is to strengthen not only the field of autonomous driving, but also the field of AI, metaverse, and other various fields.

Professor Seo added, “We will create an ‘AI committee’ within the organization to create a ‘playground’ where researchers will be able to conduct research in cooperation with leading domestic companies.”, and “With the involvement of the government, the regulator of policies, a link between the industrial and academic sectors will be created to facilitate the joint development of new technologies.