Government is to invest 247.5 billion won over ten years

Government-funded research institutes, major companies, and startup companies, and universities are joining hands for the development of ‘AI semiconductors’, which act as the brain for AI infrastructure including data centers and autonomous vehicles. The government is to invest 247.5 billion won over a decade to support the entire of process, from semiconductor design to manufacturing.

The Ministry of Science and ICT(MSIT) announced on the 23rd that SK telecom, SK hynix, and Telechips were chosen to undertake ‘AI semiconductor design’ in the ‘project for development of next-generation intelligent semiconductor technology’.

Global IT companies such as NVIDIA, Google, and Intel are leading the development in AI semiconductors. The key technology is to process massive amount of data quickly, using minimal power. According to the market research company HIS Markit, the AI semiconductor market will reach a scale of 128.9 billion dollars (approximately 153 trillion won). This is why global companies are rushing into semiconductor development, which is the center of the AI and data ecosystem. 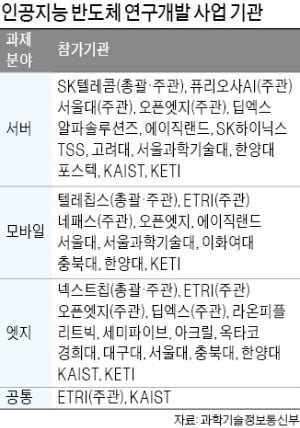 For this project, sixteen companies, ten universities, and two government-funded research institutes form four consortiums to take on thirteen subtopics in the four fields of ‘server, mobile, edge, and shared’. In the server field, SK telecom, Furiosa AI, and OPENEDGES will act as the main players in developing ultra-fast interface technologies and NPU(Neural Processing Unit)s that can be used for high-performance servers such as cloud data centers. An amount of 70.8 billion won will be invested over eight years. A source from MSIT explained, “The goal is to develop a server(module) that has the operation capacity of more than 2PFLOPS(PFLOPS: quadrillion times per second)”. NPUs and interface technologies that are thus developed will be applied and tried out in SK telecom’s cloud data center and SK hynix’s next-generation memory controllers.

In the mobile field, ‘Telechips consortium’, consisting of Telechips and eleven institutes, will develop NPUs that will be applied in mobile devices such as autonomous vehicles and drones. Over five years, 46 billion won will be invested. Technologies developed through this process will be applied to Telechip’s semiconductor for vehicles.

In the edge field, NPUs for IoT (Internet of Things) devices such as equipment for image security, audio, and biometric recognition security will be developed with 41.9 billion won over five years. The research results of seventeen institutes will be merged with Nextchip’s image security devices such as CCTVs and dash cameras and Octaco’s biometric recognition security devices.