Electronics and Telecommunications Research Institute (President Myung Joon Kim) announced the development of a transparent pressure sensor with ultra-high sensitivity on the 13th. This work was done in cooperation with the research team of professor Yongtaek Hong from SNU.

<Structure of the pressure-sensitive display developed by ETRI and SNU>

This technology enables accurate detection of very fine pressure with 20 times higher sensitivity. To easily detect where pressure is applied, the team designed the sensor to generate light at corresponding locations. Light-generating pressure sensors are adaptable to not only the electronic skin but also many other numerous applications such as biometric authentication, wearable devices, and medical equipment.

Conventional pressure sensors are implemented by placing electrodes perpendicularly in a pattern.

Sensor material is inserted in the area where two electrodes intersect to detect the applied pressure by its changing electric conductivity. However, the sensitivity is low to detect minute changes and signal post-processing is required to obtain the result.

The research team used a compound material made out of nano-wires and nano-cellulose to solve the sensitivity problem. They used the fact that the electric conductivity of nano-wires increases when the wires touch each other frequently. To increase the frequency of contact, an ultra-thin transparent high sensitivity sensor with a micrometer(㎛) thickness was composite materialized.

Furthermore, quantum dots were used to allow the easy detection of the amount of pressure with the naked-eye. A nanomaterial was placed above a layer of quantum dots which generates light when electricity is applied. 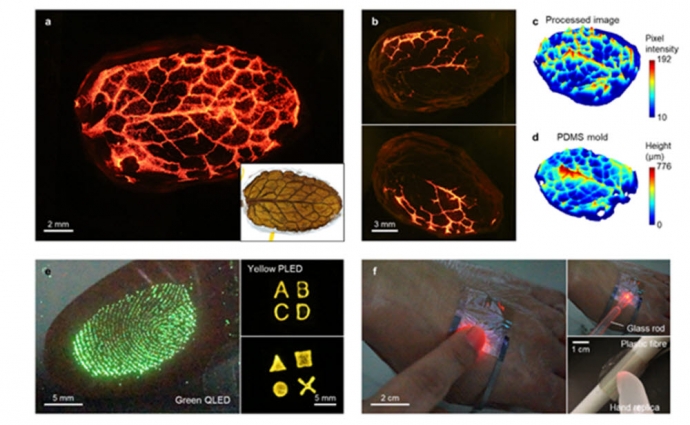 The developed sensor is 2㎛ thick and 100mm in height and width. It is possible to make it transparent and flexible and is also useful for making large substrates or wearable devices.

The team explained that it is possible to detect very fine pressure patterns such as leaf veins or fingerprint patterns and depth in real-time. They are planning to transfer the technology to pressure sensor industries in security, electronics and medical.