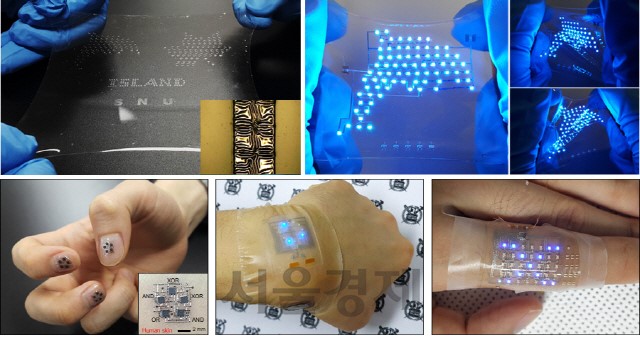 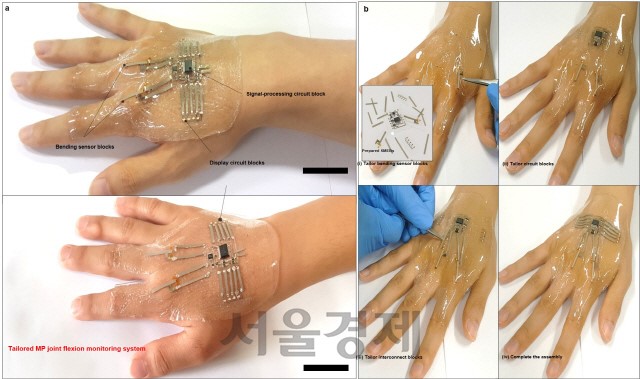 
Futuristic technologies often seen in science fiction movies such as foldable smartphones, rollable displays, electronic control system attached to surfaces of artificial intelligence robots, are anticipated for commercialization one after the other.
Wearable devices, which started in the form of glasses or watches, are expected to evolve into a skin or clothing attachable type in the near future. This new type of wearable device should be attachable to bumpy surfaces such as clothing or skin and should maintain a stable performance even when external mechanical stress is applied.

The stretchable hybrid electronics technology, which was developed for this purpose, can control the distribution of strain that indicates the degree of deformation. It can implement a stable electronic system by integrating printed soft sensors and stretchable electrodes on a circuit board platform.  Many leading research groups developed and presented materials and devices showing top performances in papers or videos in limited situations but the commercialization was difficult.

‘Scientist of the Month Award’ is co-organized by the National Research Foundation and Seoul Economics and hosted by the Ministry of Science and ICT. Professor Yongtaek Hong, recipient of the ‘Scientist of the Month Award’ in November, is acknowledged for his contributions to the commercialization of such next-generation display. He designed a stretchable printed circuit board by controlling the distribution of strain and proved that their system implementation technology works even when physical deformation is applied.
Stretchable electronics is a key technology in next generation electronics systems since it can show stable performance even when attached to non-smooth surfaces like human skin or robots.  However, developing an actual prototype of attachable wearable devices was not successful since research was focused mainly on the material. An attachable wearable device is similar to conventional devices such as glasses and smart watches, which is connected to smartphones or tablets over the wireless network, but developed in a shape of stretchable electronic skin. Professor Hong explained that stretchable hybrid electronics is an integration of basic science to applied science including material, device, manufacturing, and system integration, and it can be applied to various fields such as engineering, science, biomedical, lifestyle, and environment. 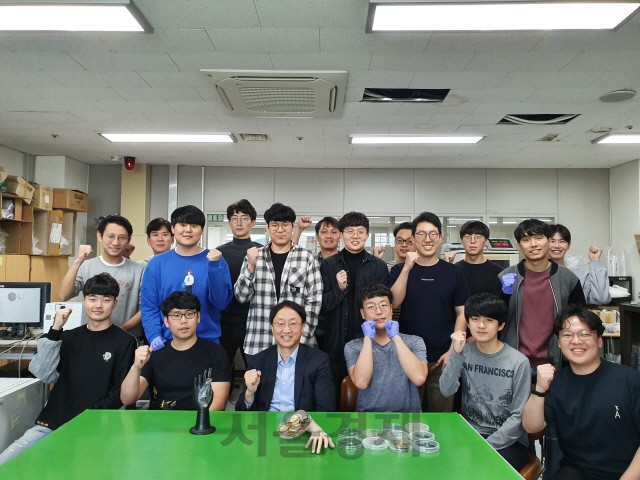 The research team of professor Hong successfully developed a stretchable hybrid electronics technology based on conventional semiconductor technology and printed electronics which can be extended to large-scale manufacturing. Furthermore, if it is integrated with printed high-resolution sensor array technology and thin film transistor technology, also under development in his lab, electronic skin, which can be perceived as real human skin or even more, can be applied to future humanoids and soft robots. Professor Hong said, “We look forward to help develop displays with new form factors such as foldable, rollable, and stretchable displays. We hope that this patch-shaped electronic device that is completely wearable can be applied to not only human but also. animals and objects as in Internet of Everything (IoE) to contribute to the advancement of electronics technology and bring social innovation.
Meanwhile, professor Hong has been serving as head of the flexible display section in the field of display (TC110) of IEC International Organization of Standardization since 2010 and strived to push domestic technologies into the international standards. 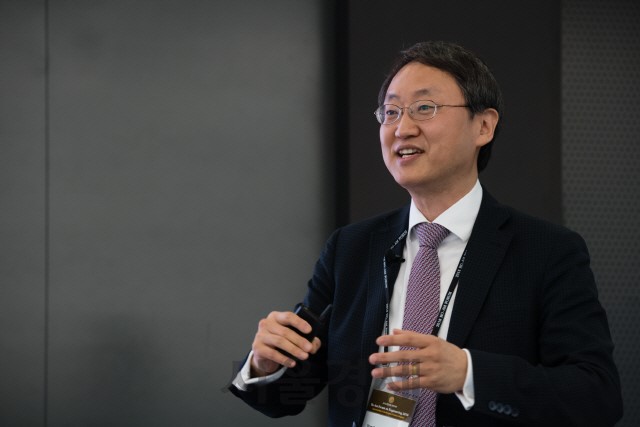 Professor Hong, “Submitting papers should not be the goal…work towards commercialization of the technology “

“Researchers often stop at only theoretically showing the possibility of advanced technologies so they are misconceived as crying wolves and disregarded in the context of commercialization.”

During the interview on the 6th, Yongtaek Hong (48, photo), professor of Department of Electrical and Computer Engineering at SNU, said, “I emphasize to the students that submitting papers to top conferences should not be the goal.” It means that one should always criticize their work in other people’s shoes and take time thinking about how to improve the technology for commercialization.

When new students join his team, he tells them to be scared of not trying at all rather than failing and not be a fool losing people by prioritizing research achievements over them. In other words, it means that one should find something he likes and devote himself continuously rather than going for fancy topics.

Professor Hong revealed that he would like to help people with disabilities by developing electronic skin which surpasses human capabilities and to develops artificial skin technology for humanoids and driving technology for body-worn soft robots. He said that he will continue work hard with a goal rather than a simple wish quoting the Doctrine of Mean, where it says I will try a hundred times when others do well by trying only once and I will try a thousand times when others can do well by trying ten times. He emphasized that we should develop new technologies and foster human resources to prepare for the future under continuous government support mentioning how key industries of Korea are undergoing difficult situations with the growth of China that has a substantial amount of government support. Professor Hong received a B.A. and M.S. in Electronic Engineering from SNU and received a Ph.D. in Electrical Engineering from Michigan University in the United States.