Developing an MRI that can detect even microvasculars in brains 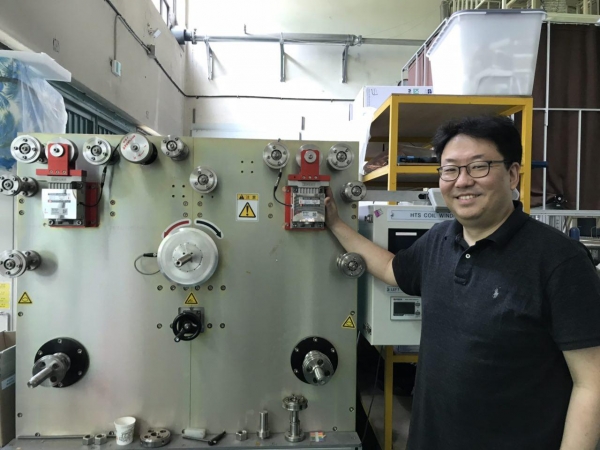 Electronic components made out of silicon brought a paradigm shift in the semiconductor industry, which Korea is highly reluctant on economically. Recently, there have also been movements for a change in high magnetic field generation technology, which is considered as one of the fundamental technologies that could change the foundation of manufacturing.

The research team of professor Seungyong Han of SNU, in cooperation with National High Magnetic Field Laboratory (NHMFL) of the United States, achieved a new world record for the direct current magnetic field using ‘no-insulation high-temperature superconductive magnets.’ Their achievement is acknowledged to have shifted the paradigm in the ultra-high magnetic field generation technology by presenting a fundamental solution for the safety and the cost efficiency issue that was considered as limitations of high superconductive magnets for the last 30 years.

When we met Seungyong Han, associate professor of department of electrical and computer engineering at SNU New Engineering Building in Gwanak-gu Seoul on July 22nd, he said, “ The introduction of the high energy density superconductive technology to miniaturize electronic devices, will change the foundation of manufacturing and has the potential of becoming a fundamental technology that can bring out competitiveness in the market. For the applications of high magnetic fields, implementing ultra-magnetic field magnets, which was not possible when the size of the magnets was too big, will bring innovation in many different fields such as medicine, diagnosis, environment, transportation, and military.

No insulation high temperature supercontuctive magnet co-developed by the research team of professor Seungyong Han of SNU and NHMFL which broke the world record with 45.5T direct current magnetic field

- What are the applications of high energy density superconductive power devices?

- What was the biggest problem in high energy density magnets application research?

- Why should a superconductive power device be designed to have high energy density and a very small size?

“With the fourth industrial revolution happening around the world, the amount of power consumption is increasing immensely. (3% annual growth for the last 10 years). To deal with this demand the required size and capacity of power devices have been rapidly increasing. Placing these power devices, however, yields many practical problems including the cost for the site and opposing opinions from the people who live around the area. Miniaturizing the power devices with the help of high energy density superconductive technology can be a fundamental solution for these problems. Furthermore, for the applications of high magnetic fields, implementing ultra-magnetic field magnets, which was not possible when the size of the magnets was too big, will bring innovation in many different fields such as medicine, diagnosis, environment, transportation, and military.”

- What is the main focus of your research?

- Your recent work was published in the Nature Journal.

- What is the contribution of the research?

- What were the improvements that make this technology different from the others?

- What are the applications?

“Recently, most of the developed countries are starting to use the no-insulation high-temperature superconductor magnets in their industries. Since it is a fundamental technology in the field of high magnetic field and power, it can be applied to a wide variety of areas such as power generation, medicine, diagnosis, environment, transportation, and military. Other than the research on high magnetic field magnets, NHMFL has been recently working on small-sized tokamak (SPARC) with MIT, magnets to detect Axion with magnetic field of 25T with the Brookhaven national research center of the United States, 1.4MW motor for electric airplanes with NASA, fifth-generation superconductor accelerator magnets for cancel treatment and 9.4T full-body MRI scanner with Toshiba-Waseda University of Japan, 1.3GHz NMR for protein analysis with Japan’s RIKEN and MIT, and a 30T high magnetic field superconductor magnets with the Grenoble National High Magnetic Field Research Center of France and Science Center of China. Especially, it is worth noting that Chinese companies are applying this type of technology such as magnetic separator using induction heating to their manufacturing industries. In Korea, 400MHz NMR magnets of Korea Basic Science Institute (KBSI), Axion detector magnet of Institute of Basic Science (IBS), heavy ion accelerator magnet currently under development by SuperGenics and IBS, hyperloop maglev trains by Korea Railroad Research Center, and industrial induction heating of SuperCoil are the main applications.”

- What were the opinions of the academia?

“Generating and handling high magnetic fields is an important factor in modern civilization. Therefore, our technology is considered to have shifted the paradigm of generating high magnetic fields in a sense that it is a fundamental technology that can generate high magnetic fields in a safe and cost-efficient manner which was not possible until now. Furthermore, it is highly appraised for its applicability to other industries with its compact size. In 2017, IEEE added the ‘No-insulation HTS(high-temperature superconductor)’ to its official list of different technologies. Also, the subtitle of the Workshop on Accelerator Magnets in HTS hosted by CERN of Europe and held on April 2019, was set as ‘No-insulation’. Many top international conferences have been operating an individual session for ‘No-insulation HTS magnet’ since 2010.”

- How far are we until the full development?

“It depends on the application. It is hard to generalize, but less than 20T magnets for industrial applications is nearly optimized and is starting to be commercialized. However, in the case of larger than 20T magnets or bigger sized magnets for MRIs, there is still room for research and development for more specific details of the technology since there is hardly any end-to-end system. Also, the complete system does not comprise only magnets, so there should be further research on connecting this to peripheral devices."

- What is the remaining work for optimizing the technology?

“As mentioned in our Nature Journal, we observed a very unique mechanical distortion that happened on the high-temperature superconductor material when higher than 45.5T of magnetic fields was applied. It was not possible to explain this phenomenon with conventional theories that analyze non-linear currents generated from superconductor materials. Recently, the SNU research team proposed a new physical model that can explain the cause of this distortion. The work was presented at a top international conference hosted by IEEE in November 2018, which provoked interests from others. As active researches are ongoing throughout the world, how accurate the analytical model is designed and how accurate superconducting magnets can be operated cost-effectively and efficiently will change which country will become the leader in the related field and market.”