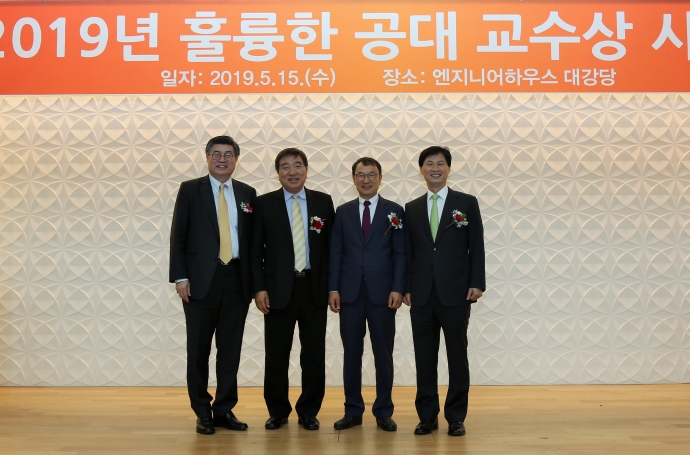 Professor Jong Gae Shin, recipient of the Excellence in Teaching Award, has been continuously conducting research and providing education in the field of naval production engineering since being appointed to SNU Department of Naval Architecture and Ocean Engineering as an assistant professor in 1993. He first started the course, “Production Science of Ships and Offshore Plants,” for deeper understanding of engineering theory and technology related to shipyard production. Also, through the course, “Production system based on Simulation,” he systemized the theory on how to transform the production system of a shipyard to a manufacturing-oriented computer model and how to optimize and verify the model based on simulations.

Professor Shin strived to educate future intellectuals in the field of naval architecture and ocean production system, producing 25 doctoral graduates and 62 masters graduates over the last 26 years. Also, he provided global research opportunities to his students through cooperative relationships with overseas software companies.

Recipient of Excellence in Research award professor Kyoung Mu Lee, made a huge contribution in human resource development and research advancement in the field of computer vision and machine learning since 2003 when he came to SNU as an assistant professor of department of electrical and computer engineering. He published more than 140 papers to international journals and conferences, and has more than 10,000 citations in the recent 5 years, according to Google Scholar, leading the field of computer vision and artificial intelligence. He also received multiple awards such as Scientist and Engineer of the Month in 2018 from Ministry of Science and ICT.

Professor Lee has been actively participating in activities both inside and outside the school. He has founded Computer Vision Conference of Korea in 2016 and is serving as the president. Internationally, he has been appointed as the vice chief editor of IEEE TPAMI (Transactions on Pattern Analysis and Machine Intelligence), which is an international journal on artificial intelligence, for the first time as an Asian, and is serving as an editorial consultant for Academic Press and Elsevier. Also, he is working as chief organizer of Korea and general chair for the international conference ICCV 2019.

Professor Yeong Gil Shin, who received the Excellence in Industry-Academia Cooperation Award, has been conducting research and providing education in computer graphics and image processing since 1992 at the department of Computer Engineering. Especially, he has been leading the digital health care industry as an expert in medical IT imaging. He has initiated the foundation of on-campus startups including 3DII and 3D Mad (Infinite Healthcare), and received the best technology award from Ministry of Knowledge Economy with the medical imaging technology of Infinite Healthcare.

Professor Shin conducted 82 industry research projects so far and contributed to developing core technology. He is also leading the research on virtual/augmented reality as part of the National Growth Engine Project. He is working as the technical consultant for Ostem Implant and Samsung Electric and is actively participating in industry-academia cooperative research.

Dean of College of Engineering Kook Heon Char commented on the award results saying, “I would like to appraise the three professors for their research achievements and contributions even under difficult national and global circumstances. The three recipients are good examples of those making huge contributions to the industrial development of Korea. The awards holds significance of passing the message of devotion and passion to the society.”