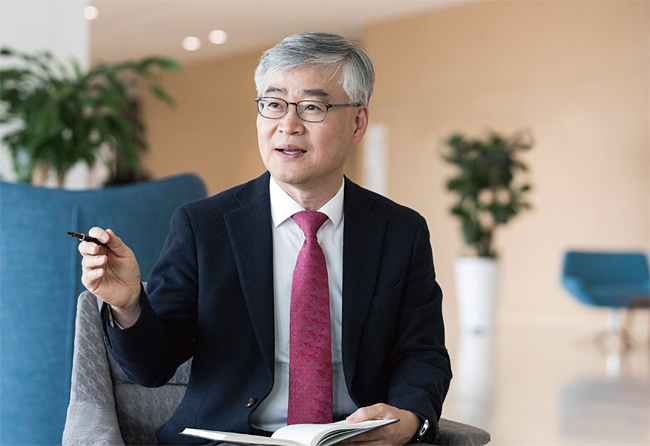 The Korean Society of Automotive Engineers(KSAE), founded in 1978, has 25,000 members. Most of the major domestic companies are corporate members. Last year, SNU ECE Professor Seongsoo Hong(57), who is the group’s vice president as well as a computer engineer, established a research group within the society for experts in information technology (IT) including semiconductors called ‘Research Committee for Automotive Semiconductor and Software(자동차 반도체 및 소프트웨어(S/W) 연구회)’. This was because an era of autonomous cars made possible with semiconductors and computer software was drawing near, but there were only a few IT experts within the Korean Society of Automotive Engineers. There was anxiety aroused within the society that if more IT experts did not take interest in the automobile industry, not only KSAE but also domestic car industry itself could be threatened.

Entrepreneurs, professors, and researchers in the Korea Semiconductor Industry Association as well as KSAE joined the research group in support.

On April 5th at Hyundai Autron(a subsidiary of Hyundai Motor Group specializing in electronic devices) in Samseong-dong, Seoul, a tech workshop will take place in celebration of the research committee’s establishment. About 200 experts will gather to discuss the topic of ‘the future of automotive semiconductors and system software’ and the development of Korea’s system semiconductors, especially about the automotive semiconductor industry.

In the morning of March 27th, in a research lab in Samsung Electronics SNU R&D Center in Gwanak-gu, Seoul, we asked Professor Hong about the current situation of Korea’s automotive semiconductor industry and the role of the ‘Research Committee of Automotive Semiconductor and Software’. Professor Hong worked at SNU from 1995 and has conducted research in computer software. Recently, he is working on automotive software platforms corresponding to the Android operating system in a smartphone. “We would like to create a podium upon which semiconductor designers and automobile experts can interconnect with no barriers and start-ups can aggressively confront challenges within the automotive semiconductor field,” he said.

“There was concern within KSAE over a lack in semiconductor and software experts. Because of such concern, I created the research committee after repeated attempts of asking for help from IT experts outside KSAE. Through this, I hope to create the foundation for IT researchers and developers in the automotive industry where they can overcome barriers to communication and collaboration. Also, I hope to offer help to start-ups so that they can tackle challenges in automotive semiconductor and software. Honestly, because technology in the automotive semiconductor field is extremely diverse and low in probability of success, a single company cannot develop all technologies. Therefore, start-ups where failure is allowed and whose ambitious spirit is an asset must aggressively enter this field.”

What does it mean to provide a vision and to form a new market.

“Apple is a good example of creating a new market. Apple opened up an enormous market by combining pre-existent technologies to develop the smartphone and by constructing an ecosystem surrounding the market of smartphone contents. It could be successful because although the technology was already there, it provided vision by gathering the technology into one device called the smartphone and provided additional value to customers.”

What attempts should domestic companies make to add value to new fields including automotive semiconductors.

“Technology is important, but for now, it needs story-telling. Story telling is the ability to make users and customer companies empathize with the meaning of the semiconductor I am trying to make. A good example is how Jeong-ui Son, CEO of SoftBank, said, “We will place the AP (Application Processor. It is a semiconductor that processes the data of mobile devices such as smartphones and acts like the central processing unit of a computer) of ARM (a semiconductor designing company acquired by SoftBank) in one trillion artificial intelligence and IoT(Internet of Things: communication between objects with a high-speed Internet) products.” What this means is that he hopes to dominate the high-performance AP design technology that allows individual IoT products to process AI calculations on its own. Until now, AI processing depended on a central server of a cloud system. Therefore, all data had to be sent to the central server and the result of the data processing done in the central server had to be received. However, if an AP is designed so that the terminals can independently do the AI calculation processing without the central server, the IoT devices with this AP do not require a central server. This will allow faster data processing in real-time. If this becomes a reality, most IoT devices will have to use AP designed by ARM. If CEO Son’s plan is realized, digital interaction between human and devices will be possible. For example, if a person sits on a chair in front of a desk, the chair and desk become aware of the seated person and may react, “As this person likes leaning back 85 degrees at this time, let’s provide such a setting.” For our companies to shift the semiconductor industry paradigm and be more successful, they have to offer such a story and vision.”

Which automotive semiconductor company has been most successful in adding value

“NVIDIA. NVIDIA is a company that manufactures graphic processing units(GPU) and is recently succeeding in adding value to the automotive semiconductor field. This company boosted the performance of GPU so that a vast amount of data can be simultaneously processed and thus applied to autonomous cars. GPU was originally a business field centered in the game industry. However, based on its strength in technology, it expanded its applications to automobiles. With unrivaled strength in technology, it added value that could only be bought with a high price.”

Any advice for Korean semiconductor companies?

“One should not obsess over past methods of success. Especially when one is entering the automobile semiconductor industry, which is a completely new field, one has to possess the modesty and open-mindedness to first approach and collaborate with companies that have accumulated knowledge in the automotive industry. To succeed in this field, one has to find a way to coexist by forming alliances with people who can cooperate and by supporting start-ups.”