Alumnus Seungsoo Lim, Experiences the utmost shock from reading “Capital” out of intellectual vanity (The Hankyoreh, 20180722)

A manual of Marx’s ‘The Communist Manifesto’

“Marx’s interpretation of the world is still valid”

“When desires are repressed, monsters are created” 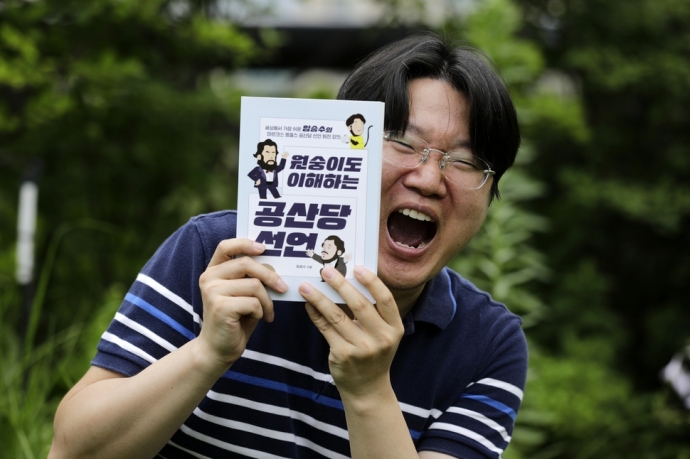 Seungsoo Lim, author of “The Communist Manifesto that Even a Monkey Understands”, is making a silly face while holding his book on the 13th at the Hankyoreh company building in Gongdeok-dong, Mapo-gu, Seoul.

A wine loving Marxist who travels overseas through credit card installments. Master’s graduate of SNU school of engineering and a professional writer of ‘progressive practical books’. These words, infrequently brought together, explain author Seungsoo Lim(43) without any contradiction.

Karl Marx’s “Capital” brought author Lim to enter such a unique way of life. When he was an undergraduate of SNU ECE, he took out and read “Capital” out of the simple intellectual vanity that university students ought to read Marx. The book offered him “the utmost shock that printed words could ever give an individual”. Afterwards, he obtained a Master’s degree through research on semiconductor material at graduate school, and worked for 5 years as a researcher in a venture company. He left the company in 2006 in order to concentrate on the progressive political campaign as a member of the Democratic Labor Party. In the same year, he published his first book, “Chávez, Challenging the U.S.”, beginning his publishing career in earnest. Now, his major income source is his 150~200 lectures each year.

“Capital that Even a Monkey Understands”(2008), which was written based on his experience reading the hard-to-read book “Capital”, has become his major accomplishment. Over forty thousand copies have been sold until now and a revised edition has also been published. In 2011, a Chinese edition was published, and recently, he has spent his own 8 million won to translate it into English and proceed with its publication in English-using countries. When we met him on the 13th at the Hankyoreh newspaper company in Gongdeok-dong, Mapo-gu, Seoul, he said, “Some read my book and afterwards half-jokingly say, “I could not even understand this book. Am I no better than a monkey?” Then I answer, “Sorry, I named it provokingly to sell it. I’m sorry.” I was trying to think of a title that is hard to forget when I was inspired by the book title “Physics that Even a Monkey Understands”, which appears in a comic book. Isn’t it a title that can revive even a dying book?”

In 2010, he continued with the publication of “Marxist Philosophy that Even a Monkey Understands”, and this time, he published “The Communist Manifesto that Even a Monkey Understands”. Thereby, he completed the trilogy on Marx’s economics, philosophy, and campaign. The book he wrote this time, “The Communist Manifesto that Even a Monkey Understands”, allows readers in their twenties to feel the thrill of properly understanding “The Communist Manifesto”, which was a sensation to him when he read it in his forties. As if a club senior or a private tutor were explaining. “There are parts of Marx’s writing that are wrong in the current situation. However, post-modern ideas, which appeared after the demise of East-European socialist nations, fail to perceive through a telescope because it only sees through a microscope. Marx’s insight concerning capitalism’s exploitation structure and historical materialism is not only still valid, but desperately needed.

In this age, when Marxists are called “natural monuments”, what do Marxists believe in. “I believe that our future society will be structured in a different manner from now. There will be various ways to implement it. In Marx’s “The Communist Manifesto”, he wrote that a society should be overthrown with violence. At the time, there were no democratic elections, and society did not seem to possess the least possibility of social change. Violence was the only way to replace the social upper class. In modern times, though, as elections became more common, the possibility of changing the future through democratic methods appeared.”

He left the party when the Democratic Labor Party merged with the Participation Party to become the Unified Progressive Party and he currently does not belong to any party. “I did not believe it would be a good choice to work in a particular party when the progressive camp has been divided. If I joined one party, from then on, the people from the other side would not listen to my words.”

How do leftists like him judge the Moon Jae-in government? “I hope that the Moon Jae-in government fares well. At first I expected a lot after seeing him meet temporary employees of the Incheon Airport, but considering his recent moves, perhaps the reformatory characteristics might have faded. As world-wide economy is entering a decline, the government is feeling confusion and anxiety and is moving toward the financial field. I am concerned about this.” 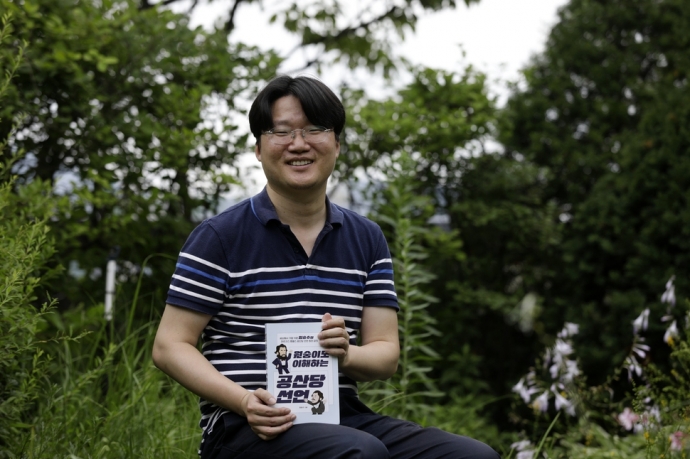 In “I Am a Happy Defective Item-A Cheerful Survival Story of Capitalism by a Professional Marxist(나는 행복한 불량품입니다-생계형 마르크스주의자의 유쾌한 자본주의 생존기)”, which was published last April, he unraveled the story of a couple who both live as full-time authors but travel overseas with their two daughters and live happily while enjoying wine. “Humans are animals that have both a desire for food and sex. I believe moralism that denies humans’ animalistic qualities cannot possibly succeed. We have seen many who have become monsters because their self-inflicted restraints repressed their desires that eventually decayed. As author Kwang-soo Ma said, there has to be a sewer for there to be a water supply facility. You have to acknowledge yourself that has desires and adequately resolve and express the desires with alcohol or travels for you to be healthy. Only if you do so can you keep up social campaigns.”

He is preparing for various “progress guides” including a beginner’s book on wine, and easy-to-read books that explain time, democracy, and Korean economic history. “Books create events in life that only happen with the publication of those books. I am awaiting what will happen and make my life interesting after the publication of “The Communist Manifesto that Even a Monkey Understands” and the English edition of “Capital that Even a Monkey Understands”.