The English textbook Professor Emeritus Wook-Hyun Kwon wrote for the last five to ten years, Stabilizing and Optimizing Control for Time-Delay Systems(Publisher: Springer), was introduced in the Springer company homepage. 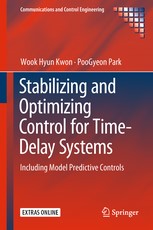 Stabilizing and Optimizing Control for Time-Delay Systems introduces three important classes of stabilizing controls for time-delay systems: non-optimal (without performance criteria); suboptimal (including guaranteed costs); and optimal controls. Each class is treated in detail and compared in terms of prior control structures. State- and input-delayed systems are considered. The book provides a unified mathematical framework with common notation being used throughout.

To facilitate computation, the authors use linear matrix inequalities to represent gain matrices for non-optimal and sub-optimal stabilizing controls, and all the initial conditions of coupled differential Riccati equations of optimal stabilizing controls. Numerical examples are provided with MATLAB® codes (downloadable from http://extras.springer.com/) to give readers guidance in working with more difficult optimal and suboptimal controls.

Academic researchers studying control of a variety of real processes in chemistry, biology, transportation, digital communication networks and mechanical systems that are subject to time delays will find the results presented in Stabilizing and Optimizing Control for Time-Delay Systems to be helpful in their work. Practitioners working in related sectors of industry will also find this book to be of use in developing real-world control systems for the many time-delayed processes they encounter.

Wook Hyun Kwon received B.S. and M.S. degrees in electrical engineering from Seoul National University in 1966 and 1972, respectively, and a Ph D. degree from Brown University in 1975. He was an adjunct assistant professor at the University of lowa (1976-1977). He has been with Seoul National University since 1977, where he is currently a professor emeritus of School of Electrical and Computer Engineering since 2008. He was a visiting assistant professor at Stanford University in 1981-1982. He was a chair professor of DGIST (Daegu Gyeongbuk Institute of Science and Technology) in 2010-2014. Between 2005 and 2008 Professor Kwon served as President of the International Federation of Automatic Control.

PooGyeon Park received B.S. and M.S. degrees in electrical engineering from Seoul National University in 1988 and 1990, respectively, and a Ph D. degree from Stanford University in 1995. He has been with POSTECH (Pohang University of Science and Technology) since 1996, where he is currently a professor of Department of Electrical Engineering since 2005.