Korean researchers have successfully developed a soft robot system whose movement can be wirelessly controlled by attaching electronic skin as flexible as human skin.

Professor Yongtaek Hong (Dept. of Electrical and Computer Engineering, SNU), Professor Kyu-Jin Cho (Dept. of Mechanical and Aerospace Engineering, SNU), Ph.D. Junghwan Byun, and Researcher Yoontaek Lee have successfully operated a soft robot located far away with electronic skin that can be stretched and warped in form. They published their achievement in the international robotics journal ‘Science Robotics’ on the 30th, local time.

Soft robots, which are recently attracting attention, are composed of malleable material, and their individual parts are organically linked to allow free movement. Since a soft robot requires electric force supplied through air pressure regulators or circuit boards for it to operate on its own, there are restrictions to its design and movement. 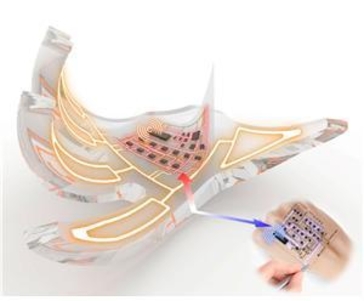 Specifically, the research team implemented the electronic skin as a pair. One component is attached to the human skin for input signal detection, whereas the other skin is affixed to the soft robot for its activation and manipulation. The electronic skin attached to the human skin acts as a remote controller and can manipulate the one on the soft robot from distances greater than five meters.

Professor Hong said, “This showed the potential of manipulating various types of soft robots with a pair of electronic skins that can easily be detached or attached due to its characteristics. This could be utilized not only in interactions between humans and robots but also those between humans and mollusks.”