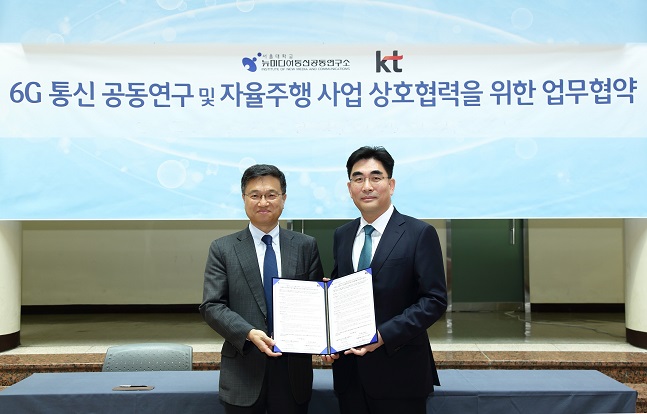 KT revealed on the 2nd that it signed the MoU with SNU INMC for joint research on 6G network and cooperation in the autonomous vehicle industry.

KT convergence research center and the institute will establish a consortium and commence their research. They will jointly work on the direction and standardization of 6G and cooperate on discovering new markets in the autonomous vehicle industry as well as on improving regulations.

In particular, they are planning on discovering new areas to apply autonomous driving technology leveraging hands-on industry experience that KT has and other technologies they possess such as 5G network, 5G edge cloud, Vehicle-to-Everything(V2X) communication, and 5G security solution GiGAstealth.

Dong-Myun Lee, head of KT Future Platform Business Group(president), revealed that as a company receiving global attention for its 5G technology, it will cooperate with SNU, the main source of research in Korea, for the standardization of 6G communication technology and commercialization of autonomous driving.

Hongbeom Jeon, head of convergence technology (vice president), emphasized that it will not only work for the successful launching of 5G network, but will also start leading the standardization of future 6G network.

Seungwoo Seo, director of SNU INMC (professor of department of electrical and computer engineering) said, “the MoU with KT holds significance in opening up the possibility of accelerating the commercialization of future technologies. We expect to make advancement in future communication system and its applications through cooperation with KT.