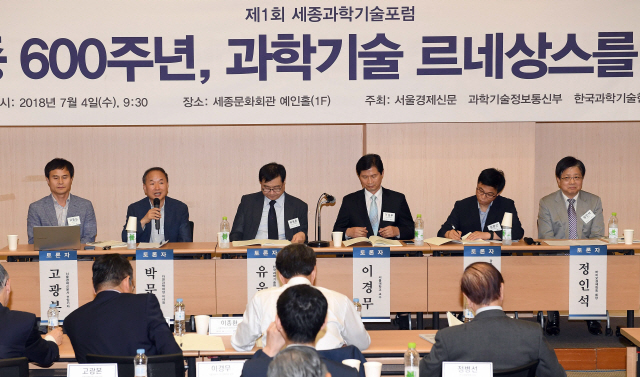 Kwang Bon D policy division of the Ministry of Science, ICT and Future Planning, and In Seok Jung, chairman of the Bio-Economy Society are having a comprehensive discussion at the ‘1st Sejong Science Technology Forum’ held on the 4th in the Sejong Center for the Performing Arts, Sejong-daero, Seoul.

In order for Korea to not fall behind the competition in the 4th industrial revolution, top 0.1% global intellectuals related to AI and Big Data are needed. However, concerns are raised that the government, industries, and academics are not keeping up with securing and developing the human resource.

At the comprehensive discussion session during the ‘1st Sejong Science Technology Forum’, which was held in the Seoul Sejong Center for the Performing Arts on the 4th and was hosted by Seoul Economic Daily, Ministry of Science, ICT and Future Planning, and the Korean Academy of Science and Technology, the debaters pointed out that all subjects of the economy should run on their feet to obtain competent global human resources.

Kyoung Mu Lee, professor of SNU electrical and computer engineering, said, “For example, D assignments, skeptical of the need of such research when they lack time to do their actual research. It is necessary to accumulate results centered around the researcher depending on post-evaluation rather than indiscriminately asking for immediate achievements.”

Professor Lee pointed out that in the past global R&D market, the academics were a few steps ahead of companies with frontier research, but now the enterprises and the academics are moving at a similar speed with no gap, which means fast movements are necessary. He said, “Looking back at the history of science technology development, it took a long time to put the technologies to practical use. These days however, there are different accomplishments on a daily basis by enterprises and the speed is very fast. Due to this change it is not easy to predict even the next 5 to 10 years.”

It was also mentioned that there is a lack in innovative leadership to bloom the science and technology renaissance. Wook Jun Yu, executive vice president of the Korean Academy of Science and Technology said, “We comparatively have a large government investment in R&D and pool of academic intellectuals. If we have a leader who can distribute and effectively make use of these resources, we can accomplish far more.” He added, “When universities or research centers try to get a research project grant, they tend to suggest obvious topics to avoid failures, which leads to predictable results. For talented individuals to appear, there needs to be an environment where challenging projects are encouraged.” Kwang Bon D.”

There was also another suggestion that the scientific community should communicate actively with the industry and the citizens. “Development in the AI industry, bio industry, and big data industry are each facing concerns of unemployment, bioethics, and personal information leakage. The scientific community should stop Lamenting and saying, “We do not know,” and try to persuade the citizens,” said In Seok Jung, chairman of the Bio-Economy Society (professor of Hankuk University of Foreign Studies). He also added, “In the past the government could force some of the promising projects to be accomplished but now there has to be agreements with the public. We hope conferences like Sejong Science and Technology Forum and renowned figures of science to actively solve this problem.” Mun Ho Park, chairman of World of Natural Science, said, “The scientific community should run a campaign that motivates daily usage of scientific terms. This type of endeavors can draw people’s affection towards science and lead to high performance.”

For the government of President Moon Jae-in, its commitment toward national R&D innovation was announced. Byoungsun Jung, director of R&D policy division of the Ministry of Science, ICT and Future Planning announced, “It is different from the past that there are no longer many government-led research fields that show high performance. The government policies should change with the development of science and technology for success. The government will initialize its internal innovation for the renaissance of science and technology.”