During the fourth session ‘Smart City and Energy’ of the ‘Future Energy Forum 2018’ held on the 21st at the Plaza Hotel in Sogong-dong, Seoul, SNU ECE professor Seung Ill Moon said, “Because it is difficult to resolve North Korea’s power issue at once, it is necessary to construct energy bases in NK through smart energy cities.” 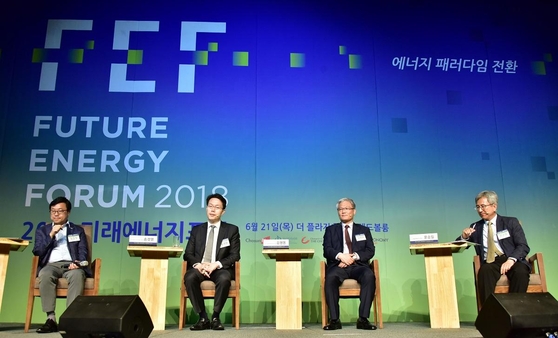 From left: Kabsung Kim(Yonsei University Professor), Kyungyeoul Song(Director of McKinsey Energy Center of McKinsey & Company), Young-myung Kim (Chief of the Smart Energy Business Division at KT), Seung Ill Moon (SNU Professor) are having a discussion about smart cities during the fourth session of the ‘Future Energy Forum 2018’ held on the 21st./Chosun Biz

Professor Moon said, “Due to North Korea’s unintentionally given conditions, it is possible to apply new technology including electricity and energy and observe the effects quickly. Smart city technology should be applied to create power base cities in North Korea.”

Professor Moon argued that the Northeast Asian Super Grid must be pushed ahead in North Korea step by step. He said, “Starting from the construction of solar ray or energy storage systems(ESS), the construction of smart cities and a national power grid concerning the supply and transmission of electricity should follow, and then we should ultimately achieve a super grid form. For things to be meaningful, we should start now and go through the stages.” He predicted that the smart city and national power grid construction would take about five and ten years respectively.

He recommended Wonsan as a smart city construction site within NK. Wonsan can maximize the ripple effect of North and South business exchange and is devoid of risk elements such as military facilities. Therefore, it was evaluated as an adequate candidate cite for a smart energy city. Because border areas such as Najin and Cheongjin could also use Russian gas, they were presented as possible second-best sites.

Professor Moon said, “If a smart city is implemented in a militarily sensitive area, relations between the two countries could be strained. Therefore, the eastern coast including Wonsan is adequate. If a smart city is constructed in an adequate city such as Wonsan, it will be possible to redeem the investment costs.”

Some pointed out that smart city construction is more of a policy and budget issue rather than a technology issue. Professor Moon said, “Although neither electricity storage technology nor management technology is perfect, I do not think that Korea is lagging behind. Securing a budget is more important than technology, and there is also a need for continuity in policy to keep pushing this forward.” He continued, “Ensuring that this will continue is the key to smart city and something we should work on.”

Professor Kim, who is the Chair of the Smart City Special Committee, said, “For smart cities, securing a budget is more difficult than the technology, and the government’s consistency is most important. For the smart city to make progress even during the next government, it must be proven that not only is success assured, but also not a large portion of government budget is required.”

Center Director Song defined the smart city as a system that allows citizens’ voluntary participation by applying ‘Fourth Industrial Revolution’ technology. He offered the result of a survey targeting many citizens in California, USA as an example to explain citizens’ voluntary participation. If the three methods, ‘compensation for energy saving’, ‘penalty for overuse’, and ‘comparison between my usage and other people’s electricity usage’, are suggested to reduce energy costs, the last method is the most effective. He said, “the third method using technologies such as big data can be an example of a smart city.”