Professor Yongtaek Hong, Soft and elastic like an octopus, Robots are also in the ‘soft era’ (ChosunBiz, 20180531)

Made of elastic materials like silicon, allows easy transformation to be used for various applications, not only for the main body but also the operating parts, looking forward to applications in all areas including medical and space exploration

The research team of SNU Electrical and Computer Engineering Professor Yongtaek Hong and Mechanical and Aerospace Engineering Professor Kyujin Cho announced, “We succeeded in driving a soft robot made out of a transparent electronic skin with a thickness of 1mm,” in the international journal ‘Science Robotics’ on the 31st.

‘Soft robot’ research is a huge boom. A soft robot indicates a robot made out of soft and flexible materials like silicon and rubber. Instead of metal skeletons and joints, the goal is to develop a soft robot that feels similar to a real person. Until now, it was limited to making part of the main body out of flexible materials excluding the skeleton of the robot or the battery. Recently, however, also making the power system and driving parts with stretchable materials was successful. Experts expect soft robots to play an active role in not only medical, exploration, and manufacturing fields but also in disasters and rescue.

A soft robot mimics animal’s muscles and tendons to bend its shape freely or change its size. Different from conventional robots, it can operate without batteries or motors. Professor Jennifer Lewis of Harvard University in the United States developed an octopus-shaped soft robot ‘Octobot’ in 2016. The 3D-printed Octobot uses chemical energy, not electricity, to operate. When hydrogen peroxide solution is decomposed, oxygen gas is generated. Using the force from the inflation of this generated gas, it can move its 8 legs alternatively. 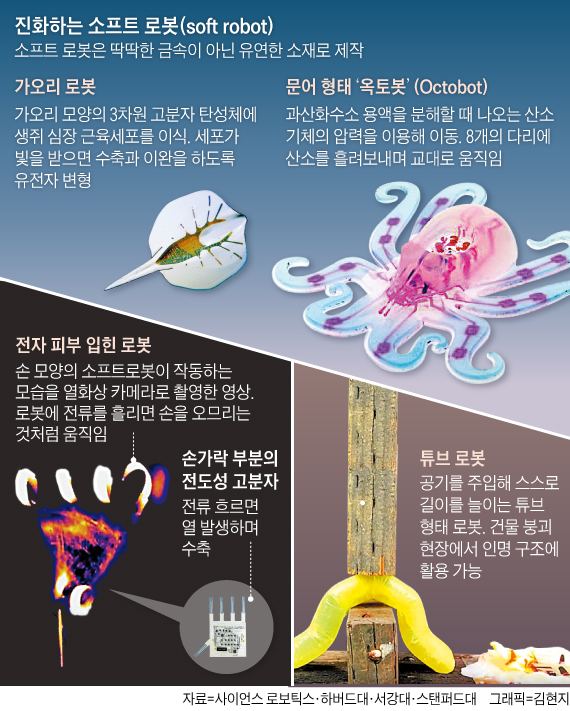 Octobot does not need a separate battery when hydrogen peroxide solution is refilled. It can move for maximum 12 minutes and 30 seconds with 1mL of 50% hydrogen peroxide solution without any external energy supply. Unlike other robots, it does not have joints moving only in certain directions, so its movement is flexible. The researchers of her team are currently developing an autonomous soft robot that can conduct complicated missions underwater. Professor Lewis said, “If the internal circuit that decomposes hydrogen peroxide is designed more intricately, it can move in a wider variety of forms than now.” There is also a soft robot that uses animal tissue. Jungwoo Choi, professor of Sogang University, coopera¬¬¬ted with Harvard University researchers to make a ‘bio-hybrid robot’ that moves using body tissues without a separate power source. This robot, which looks like a stingray, has animal muscle implants to swim underwater without an internal power mechanism. Professor Choi made the skeleton out of gold in a silicon body and implanted 200,000 heart muscle cells of the rat. The muscle cells were genetically modified to shrink and stretch when it receives light. The robot can control its contraction and relaxation movement according to the amount of light from outside and also change its direction.

Transform the shape to be deployed in disasters

Another advantage of soft robots is that it can transform its shape as wanted. It can reduce or expand to a size suitable to the environment. In collapsed buildings or nuclear accident sites where it is difficult for the human to enter, these robots can be deployed for life-saving and reconstruction. In last year July, The Stanford University of the United States developed a tube-shaped robot that can expand its length by injecting air. It is made of easily foldable soft vinyl material. Normally its rolled up like a toilet paper but it injects air and grows in size when needed, just like an accordion that expands from being compressed. The researchers attached a micro scale camera and a carbon dioxide sensor at the end of the robot for it to check the front and detect carbon dioxide emitted from survivors in a disaster scene. This robot successfully detected survivors accurately in about 10 trials conducted in scenarios with various obstacles such as ice walls. The transformation of shape is also an essential feature for medical robots that need to roam inside the complicated human body. Jung Kim, professor of KAIST mechanical engineering, said, “Soft robots are applicable to many areas in the medical field such as delivering drugs to internal parts of the human body or performing surgical operations.”